A successful season for the British junior gliding team

This season has been a successful one for the British Junior Gliding Team. Here is a summary of the competitive flying and training accomplishments that the 12 members of the Junior British Development Squad have enjoyed over this fantastic summer. Including competitions in the UK, France and Hungary as well as some of the amazing achievements of some of the squads individual flying.

Sydney Charles Aviation are proud to sponsor The British Junior Gliding Team and are excited for what the future holds for them.

‘A massive thank you to the amazing generosity from all the squad’s sponsors this year. It is pivotal in enabling such great quality training and preparation for the squad to be able to compete at the highest level. With so many great talents coming through the squad ranks over the past few years, it is evident that the continued support of our sponsors is helping to ensure a bright future for British gliding’ – Junior Gliding Team

Over the Easter weekend, Rich Hood, Jez Hood, Howard Jones and Tom Arscott ran a training weekend for the squad. In true UK fashion the weather was far from ideal but the time on the ground was spent very productively. The coaches had prepared lots of team building exercises to see how members of the squad could interact together to complete a task. The coaches then drew comparisons between the team work required to complete these exercises and flying in a team at international level.
The squad also received lectures on competition flying from the coaches and one from G Dale on weather and thermal structure. The coaches covered many topics requested by members of the squad and the lectures were extremely interactive with everyone sharing personal experiences and views. 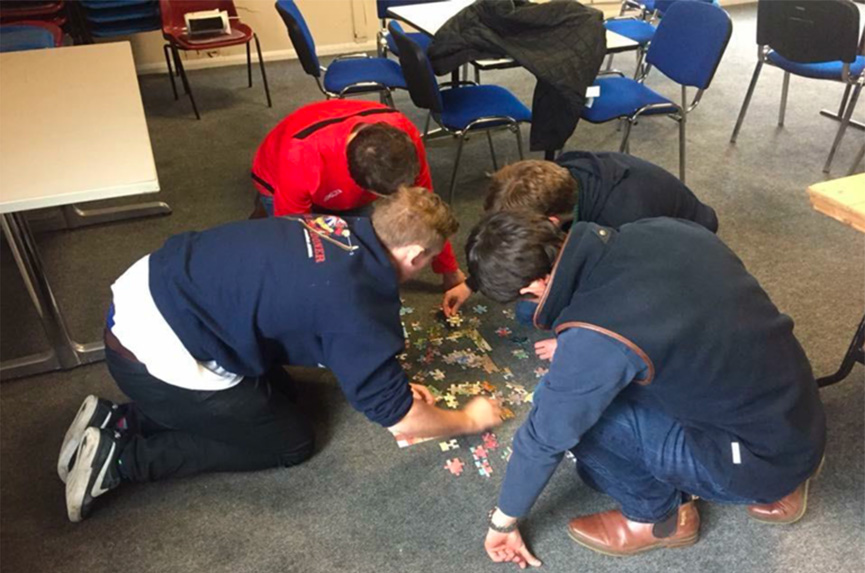 The beginning of July saw seven members of the Junior Development Squad descend on Issoudun; a gliding club in central France with a reputation for great weather. The development squad were in France for a week of training with current and former British team members Brian Spreckley, David Watt, and Jake Brattle. The weeks training was then followed by a nine day competition – the 43e International Issoudun.

The weather was very varied, putting us through our paces in different conditions. This was a great learning opportunity, and the daily debriefs with Brian continued to help us to develop our skills. Our speeds got faster and faster throughout the week as our confidence in these new conditions improved. At the end of the competition, we had all flown more than 50 hours, 2000kms, and improved our racing dramatically.

A massive thank you must go to the coaches for dedicating so much time and effort to these two weeks, the BGA and Sydney Charles for helping with funding the hire of the two seaters and helping with the squad’s travel costs, and Aerodrome Issoudun for accommodating us again. 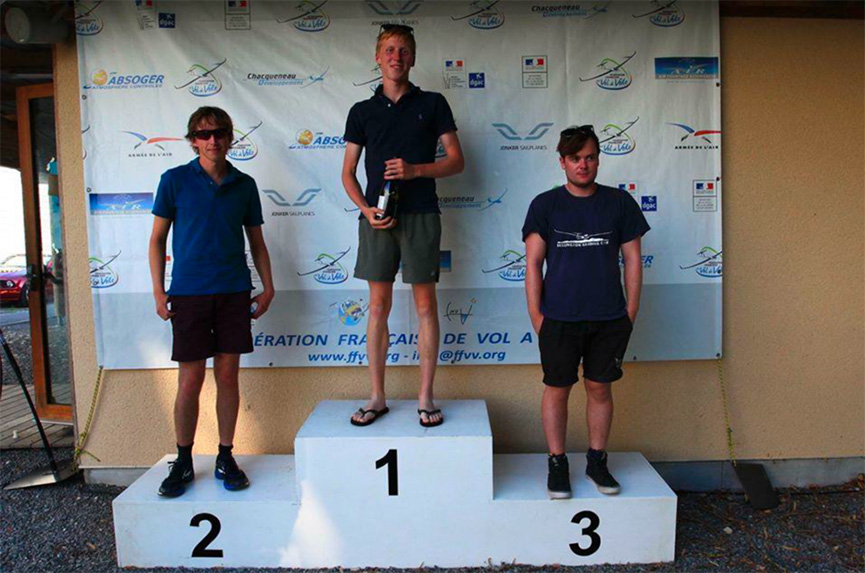 In July, Jake and I chose to travel to Hungary and fly the Hungarian Club Nationals from Szatymaz. A site that’s located 10km north of Szeged airfield, the venue of the 2019 Junior World Championships. This was a perfect opportunity to learn the local area, conditions and learn as much from the locals as possible. Conditions during the week were described by the locals as very much below average with the first three days rained out! Fortunately, things improved as the week progressed with the final two days being fast racing days with high cloud bases. Jake and I led the competition during the first three flying days but sadly had a bad day 4 which led to us dropping down a few places overall. The geography of soils in Hungary is very complex and has a significant effect on the conditions under what looks like a very uniform sky. This meant Jake and I feel we learnt a massive amount that will be invaluable for the team next year. The country is a beautiful place and the gliding community in Hungary is very close knit and could not have been more welcoming and helpful. We were given great support to break down any language barriers and made to feel very much at home.

London Gliding Club hosted the Club Class nationals this year. The 42 competitors were treated to some fantastic and some not-so-fantastic conditions during the week with 6 flying days, in largely beautiful but changeable soaring weather. As had come to be expected this summer, the Junior Squad put in some excellent performances – squad members took 4 of the top 10 places! Jake Brattle flew a great competition to finish in second overall, a result that qualifies him to fly the European Championships in Slovakia next year. This is a testament to the great coaching that he has made the most of over the past few years. 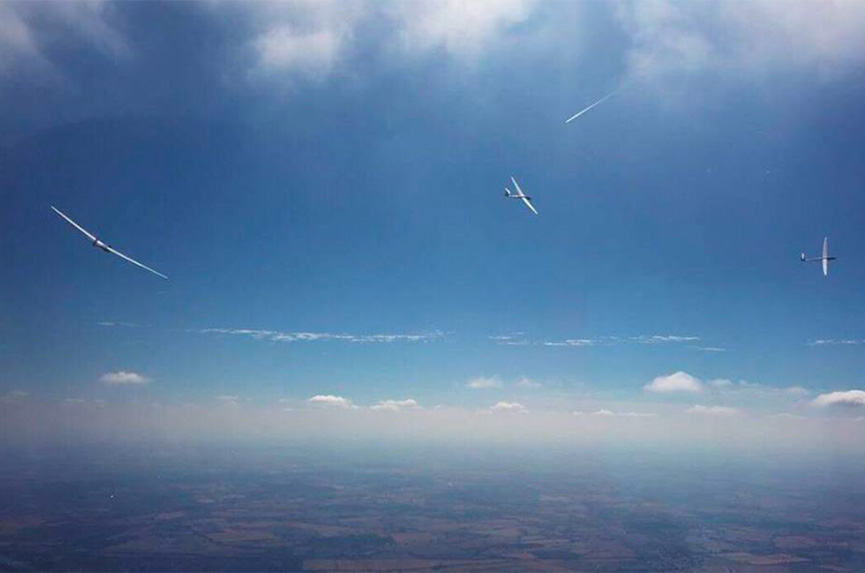 The UK Junior Nationals were held at Lasham for 2018 and had a 44 strong entry list. It was also held alongside the Lasham Regionals which led to some rather large grids and start gaggles. Unfortunately, the first three days were scrubbed so the first flying competition day was the Tuesday. A challenging 250km task was set with the expectation of cumulus to start and gradually turning blue further through the task. Despite the good climbs under the blue only 13 competitors completed the task.
The next competition day, Thursday, was windy with a lot of top cover making it tricky for the sun to reach the ground and trigger thermals, a 187km racing task was set. The wind and top cover made the last 40 km heading toward the coast and back rather tricky and cost quite a lot of time for most pilots but I and a few others managed to line up the climbs well to get back to Lasham at a decent speed.

The Friday was certainly the most memorable flight of the competition for me with large showers expected in the task area and an even stronger wind than the day before – _25kts at its peak! Shower sectors were set and certainly made use of by most competitors as quite a few showers were very close to the turnpoints. One turnpoint even required flying in and out of a small gap between two closing showers, quite a formidable sight.

Saturday was the final flying day of the competition and was forecast to be the best one yet, so a 300km racing task was set heading up towards Swindon, down to near Exeter and back to Lasham. The cloud base was decent, giving good climbs to above 5000 feet in places. A section of sea air coming off the Bristol Channel slowed progress a little when we were heading down to the South West, but the rest of the task was straight forward and fun, a great end to a week of challenging conditions. Huge thanks to Lasham airfield and the whole competition team for such a well organised and enjoyable week. 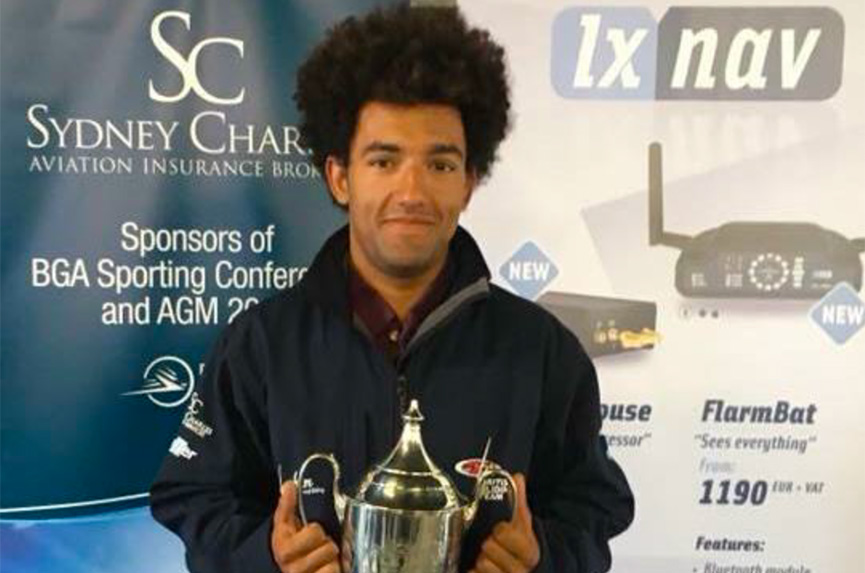 Sydney Charles are able to offer insurance for all types of general aviation clients and can provide exclusive access to bespoke insurance facilities.

Whether you are insuring an individual private aircraft, helicopter, or a commercial fleet, we can ensure that you are covered. Our independent status allows us access to a wide range of aircraft insurance plans.

"In my opinion, they are a very professional company, and the process of gaining appropriate insurance from them was smooth, easy and quick….I was pleasantly surprised by what I consider to be the relatively low cost. "

"You guys are simply the best. I am a careful and diligent flyer but running and operating Foston Airfield near Newark Is a costly hobby according to my partner! It’s good to be safe in the knowledge that if the unthinkable happened I would be able to purchase a replacement Microlight, Hull cover and peace of mind for less than a pound a day, and a service that is second to non is a no brainier for me. "

"I would like to thank you and all the staff at Sydney Charles for your excellent service over the past few years."

"Cameron, Kim and Vroni - may I take this opportunity to thank you all for your help and support regarding the unfortunate accident with my Aircraft. I received the settlement this morning, thank you. Credit to you Cameron for the unsociable hours you put in to enable a swift conclusion and to all at Sydney Charles for placing me with a great insurer that honoured the agreement without fuss. I think this incident has put a forced halt to my aviation pursuits, so may have to find another! All the very best and kind regards P S"

"They insure a large proportion of the glider fleet in UK and, I think, Europe. My glider has been insured with them for many years. Never heard anything negative.  "

"Sydney Charles were quite outstanding in the handling of the glider loss claim: sympathetic, responsive, speedy and very professional."

"They are well known in GA and seem to have a good reputation. "

"I'm on my second year with these guys. Very helpful, though I've never had to use them in anger. No issues with them and very competitive. "

"I would like to express my sincere thanks to you for your excellent knowledge and kindest consideration given to me late last Friday…you dealt with my situation splendidly. On top of that you did exactly what you said you would, you explained everything quite simply and with clarity of diction that is not always present these days."

"I would have no hesitation in recommending Sydney Charles, the service from this company and the staff is second to none. 5 star in everything."

"We use Sydney Charles and have done since I joined the group. They've been very good, including when we made a claim, and on another incident. "

"I have to say your service is second to none and very much appreciated."

"Many thanks for your kind assistance. You and your company have taken great care of both myself and my fellow pilots at Foston airfield, while it remained open. When we find new homes you can guarantee I will be back, I would not trust my aviation insurance to any other company."

"May I thank you all at Sydney Charles for your kindness and help over the years that I have been insured with you. It seems that over 30 years of my gliding life have been watched over by yourselves. In that time there have been many changes but your care, you have continued to provide both a personal service and always of a high standard."

"I would like to thank you for your service and support…your efforts and accommodation have always been excellent. As one of the UK's top insurers for gliders be assured that I/we will be back with any future requests for insurance cover."

"Many thanks for your professional kind and considerate help…..with a service this good you can be assured of my business now and for the foreseeable future."

"I recently got a quote from Sydney Charles when my insurance was due. Their quote was exactly what I requested, unlike some brokers. Their offer included the option to pay in quarterly interest-free payments, or to spread the premium over 10 months at an interest charge that was not disclosed in the quote."

"I am emailing you just to say how delighted I am with the service your Company has provided. We moved the insurance for our Cessna last year and throughout these transactions Wendy has been most helpful, fast and efficient, with the minimum of ‘red tape’ & fuss. This has been a real breath of fresh air compared to our last two brokers..everything had to be pushed uphill, and I used to dread the annual renewal!"